Charter and traditional public schools with the longest waitlists for the coming school year are clustered west of the Anacostia River, with bilingual programs generally leading the pack. But there’s also a marked difference in demand for some schools that have similar test scores. 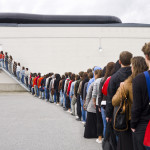 Earlier this month the District announced the results of the lottery that determines admission to many public schools, along with waitlists for each participating school. Families need to enter the lottery in order to apply to almost all charter schools and some DC Public Schools. 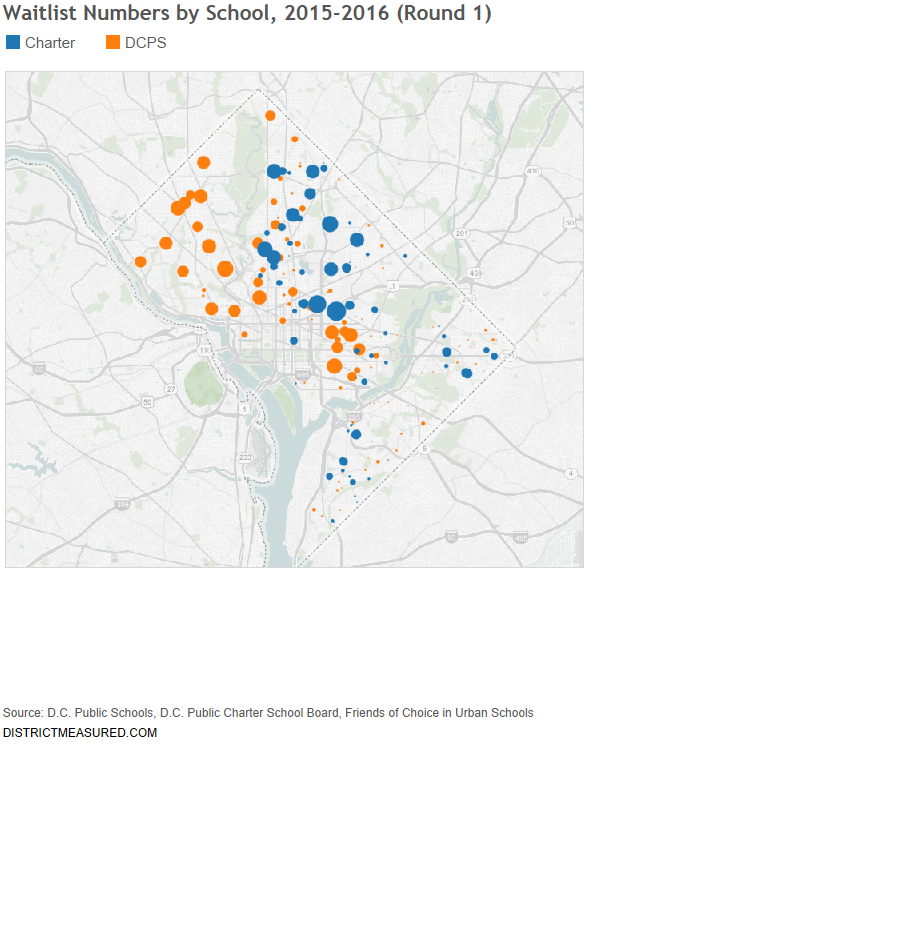 The size of the circles on the map above correspond to the size of their waitlists. (All graphics are from the DC Office of Revenue Analysis.)

Families can list up to 12 choices. This year the vast majority were matched with one of them in the lottery’s first round. But if families didn’t get their first choice, they were waitlisted at any schools they placed higher than the one they were matched with.

Both DCPS and the Public Charter School Board have created tools to help families find schools that still have space available.

DC’s Office of Revenue Analysis has published a series of interactive graphics illustrating the waitlist data on its blog, District, Measured.

Roughly speaking, the waitlist data shows where the demand is for schools, both geographically and in terms of specialized programs. One caveat is that it doesn’t reflect demand for neighborhood schools from those who live within a school’s boundaries. If a lot of “by-right” students want to attend their neighborhood school, the school simply has to squeeze them all in.

With that caveat, the map above shows that demand is generally strongest for schools west of the Anacostia River. East of the river, there’s more demand for charters than DCPS schools. 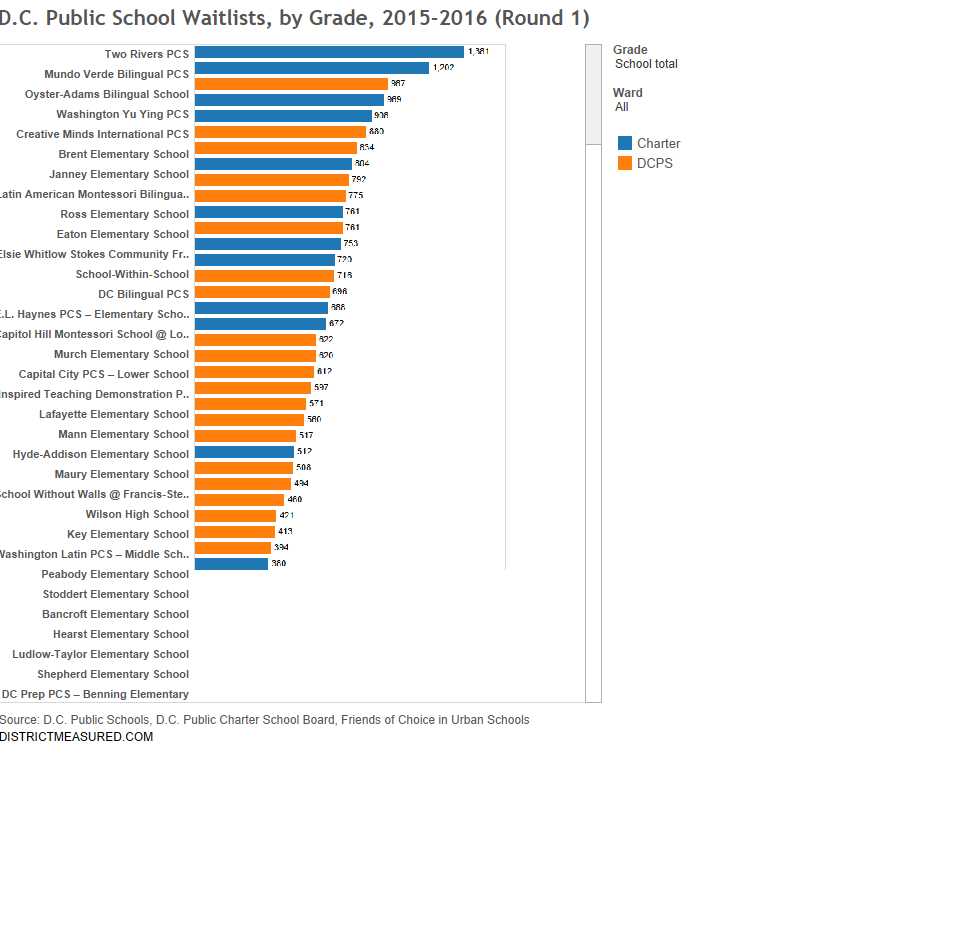 For at least the second year in a row, Two Rivers, a charter school in NoMa, has the longest waitlist, with 1,381 names. The school will open a second campus this fall with 178 spaces in preschool through first grade. That campus, in a less central location at 820 26th Street NE, has a waitlist of 183.

The bar graph above also reveals how strong the demand continues to be for dual-language programs. With the exception of Two Rivers, the schools with the four longest waitlists are all bilingual.

Perhaps the most intriguing of ORA’s graphics is the one that plots waitlist numbers against reading proficiency scores on DC’s standardized tests. 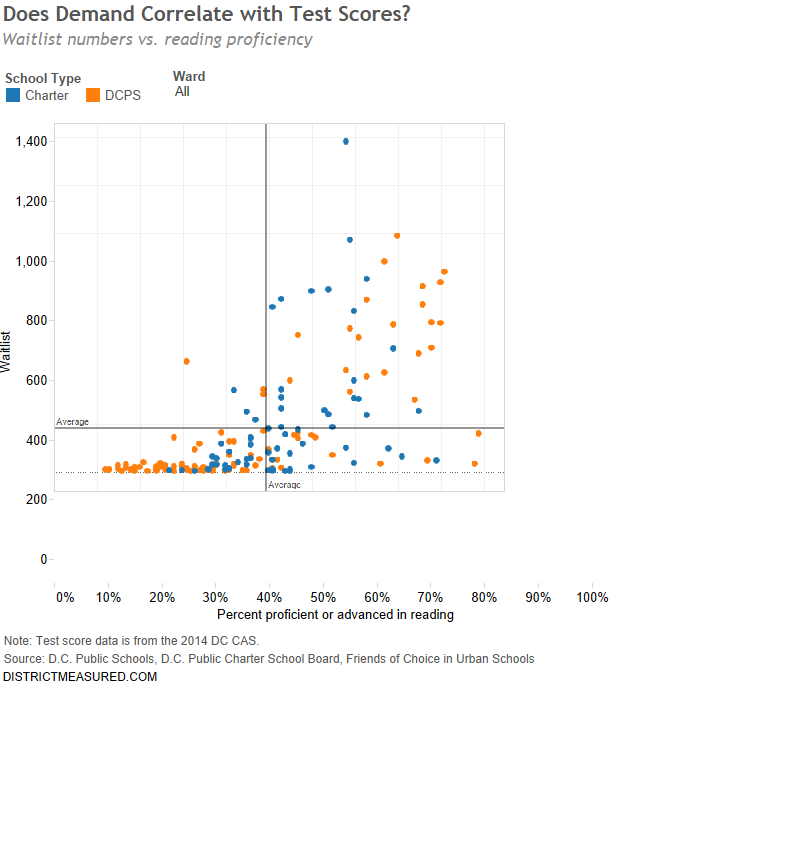 Generally speaking, the schools with the highest scores also have the highest demand. But there are exceptions that show families don’t make decisions about schools just on the basis of test scores.

For example, Bancroft Elementary in Mt. Pleasant and Martin Luther King, Jr., Elementary in Congress Heights have similar unimpressive reading proficiency rates: 31% for Bancroft and 32% for King. But Bancroft’s waitlist has 460 names on it, while King has no waitlist at all.

But there are almost certainly other factors at work as well. For one thing, while Congress Heights, in Ward 8, may be on the rise, it hasn’t yet seen anything like the gentrification that’s been going on in Mt. Pleasant for decades. And it’s in a far less central location.

And if Wiener is right about the importance of feeder patterns, the discrepancy between the waitlists of two other schools with similar scores doesn’t make sense. In that case, the one with the longer waitlist is the one that doesn’t feed into Deal and Wilson.

And then there’s Brent and Ludlow-Taylor elementary schools, both in Ward 6. Both have high proficiency rates of 77% in reading, but Brent’s waitlist is 880, and Ludlow-Taylor’s is 413. The schools are of similar size and have similar facilities, and neither feeds into Deal.

One explanation for the difference in waitlists may be that middle-class parents tend to choose schools where there’s already a critical mass of families like them. Brent, for example, is 64% white, and only 6% of its students are on welfare, homeless, or otherwise at-risk. Ludlow-Taylor, on the other hand, is 21% white and has 32% of its students in the at-risk category.

Of course, the difference in waitlists doesn’t mean Brent is a better school. In fact, it seems Ludlow-Taylor is doing an amazing job with a more challenging population. And the bottom line is that a whole lot of families who want to go to either of these schools are going to be disappointed.

Meanwhile, there are many DCPS schools operating below capacity. The real trick is to figure out how to make enough schools desirable so that we no longer have hundreds of students being turned away from schools they want to attend.

Correction: Originally, this post said that Capitol Hill Montessori fed into Eliot-Hine, relying on information from the DCPS website. In fact, the school goes through 8th grade, so it doesn’t feed into any middle school. Nor does it feed into any high school, because it’s a District-wide school rather than a neighborhood school. When they leave Capitol Hill Montessori, students have a right to attend the high school their home address is zoned for, or they can apply to another high school.