In a speech last week, US Education Secretary John B. King offered up a fundamental—if somewhat counterintuitive—insight that academics outside the field of education have agreed on for decades: If you want children to learn to read, don’t just teach them reading. 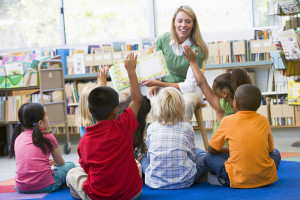 Inside the education world, that insight has been largely overlooked. And therein lies the root of many of our problems—in particular, the huge divide between rich and poor students that we call the achievement gap.

“We know that students are better able to read a text when they have had exposure to the knowledge and experiences that are referenced in that text,” King said. “We know from decades of research from folks like Daniel Willingham at the University of Virginia that knowledge matters for reading success. It is not about reading vs. science and social studies.”

In a way, King’s observation might sound obvious. We can all think about what it’s like to read, say, an abstract of an article on cellular biology, if you’re not a cellular biologist—or an account of a cricket match, if you’re unfamiliar with the game. Without the relevant background knowledge and vocabulary, the text is impenetrable.

Low-income kids start at a disadvantage

What’s less obvious is how little background knowledge many low-income children have when they enter school. A text that looks simple to an adult can be as impenetrable to a disadvantaged third-grader as a tract on phenomenology. That’s largely because, as King also mentioned in his speech, beginning at birth, low-income kids are exposed to far fewer words and concepts at home than more affluent kids.

Studies have shown that even highly functional low-income parents speak far less to their children, on average, than affluent parents. And when they do speak to their kids, they’re more likely to issue commands or reprimands than to engage them in back-and-forth conversation. Meanwhile, more affluent parents are continuously immersing their children in exchanges that expand their knowledge of the wider world and develop their linguistic abilities.

Some argue that each style of parenting has its advantages and disadvantages. But the way affluent parents raise their kids equips them to do better in school: by the time they enter kindergarten, the skills and knowledge of the most affluent children far exceed those possessed by their low-income peers.

Family doesn’t have to be destiny, though. Schools can help level the playing field, if they start systematically building low-income kids’ knowledge about subjects like history, science, and the arts from an early age.

But most elementary schools—especially those serving poor kids—have instead devoted hours each day to teaching kids reading comprehension strategies like “finding the main idea” and “making inferences,” and then having students practice the strategies on simple books, often of their own choosing. Meanwhile, subjects like history and science have fallen by the wayside.

What’s significant about King’s speech is that it marks the first time a top U.S. official has mentioned the cognitive science on reading comprehension. I was particularly struck by King’s reference to Daniel Willingham, a psychology professor who has devoted years to explaining the science of learning to teachers and the general public in easily understandable terms.

A few months ago, I noted that British government officials had enthusiastically embraced Willingham’s ideas, and I wondered why he—and other American academics who have made similar arguments, including E.D. Hirsch, Jr.—hadn’t received the same kind of reception here.

“Why hasn’t Arne Duncan—or the new acting US Secretary of Education, John King—given these home-grown education theories a similar shout-out?” I wrote in January. I’m not suggesting King got the idea from reading this blog, but it’s certainly gratifying to see my wish become reality.

But here’s the rub—actually, two rubs. The first rub is that King’s point about knowledge and reading comprehension didn’t get wide coverage—the New York Times ran nothing but a brief AP story. And, like all but a few reports of the speech, the AP story didn’t even mention this crucial point. That’s not surprising: the bulk of the speech focused on how history and the arts can spark kids’ interest and motivation and develop them into well-rounded individuals who lead rich, meaningful lives.

Why kids need dessert WITH their broccoli

Those points are valid and important. But here’s why I’m worried about leaving out the link between those subjects and reading comprehension: Even if we got rid of high-stakes reading tests tomorrow (which is unlikely to happen), people would still place a huge emphasis on teaching kids to read, especially in the early grades. That’s understandable: reading is the gateway to just about all other learning.

That’s why teachers, parents, and policymakers need to recognize that teaching history—or science or art—actually IS teaching reading. They need to stop seeing reading as the broccoli that kids have to eat before they can get to dessert—dessert being things like music, art, the American Revolution, Ancient Egypt, snakes, or the human digestive system. These are subjects that even very young kids can get excited about if they’re taught in an engaging way.

If we hold off on giving low-income kids this kind of dessert until middle or high school, it’s too late. Every year, the gap in knowledge between them and their affluent peers widens and gets harder to close. So what King is saying, essentially, is this: if you want kids to get the nutrients out of their broccoli, you have to give them dessert at the same time.

The other rub is this: Britain, like most other developed countries, has a centralized education system. If top officials want kids to learn about history, science, and art in elementary school, they can simply pass legislation to that effect.

In our system, the federal government can only indirectly influence decisions about what and how to teach. The actual power to decide what to teach rests with state and local governments—and often, in a very real sense, with individual schools and teachers.

In recent years the federal government has done a very effective job, intentionally or not, of influencing American elementary schools to do the very thing that King is now warning against: focus on reading and math to the near exclusion of other subjects. Whether the government can help undo that damage remains to be seen. But kudos to John King for beginning to try.