In recent years schools in the District have expanded opportunities for students to learn computer coding, an occupation where demand is outpacing supply. But they could do much more to engage low-income students in a potentially lucrative career path that doesn’t necessarily require a college degree. 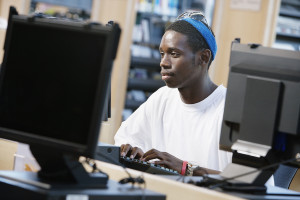 There’s been a lot of talk lately about the importance of teaching computer science in K-12 schools. Last week was Computer Science Education Week, during which students in DC and around the world participated in online tutorials billed as an Hour of Code. As part of the fanfare, the incoming Education Secretary, John King, visited a classroom at DC’s McKinley Tech High School.

DC and 26 states now allow computer science courses to count towards graduation requirements, up from only 12 states two years ago. At least two DC charter high schools offer coding classes, and DC Public Schools offer a wide range of computer-related courses and extracurricular activities, although it’s not clear how many students take advantage of them.

But much of the effort in DC and elsewhere is aimed at getting students to enroll in college and major in computer science. King, for example, asked how many of the two dozen students he addressed at McKinley wanted to study computer science in college. He was pleased when over half raised their hands.

There’s nothing wrong with students majoring in computer science in college, of course. In fact, it’s an excellent idea. The median salary for computer programmers is over $76,000. There are currently over half a million open computing jobs, according to Code.org, and last year fewer than 40,000 people graduated with computer science degrees. Forecasters predict that mismatch between demand and supply will continue at least through 2020.

The shortage of qualified college graduates is already creating pressure on employers to hire people who can simply do the work, whether or not they have the credentials. At Google, for example, 14% of the members of some teams have no college education. In general, 38% of those working as web developers aren’t college graduates.

Some coders and programmers are self-trained, while others have gone through coding “boot camps” that give participants the skills they need in a matter of months. Although Obama administration officials are intent on encouraging students to go to college, they’ve also launched an effort to enroll more “low-skilled” individuals in coding boot camps and match them with employers.

Why not teach coding skills before kids graduate from high school?

No doubt these programs can be lifesavers for many who don’t have the interest or resources to acquire a college degree. But why wait until after they’ve graduated from high school? Why not give students in K-12 schools the opportunity to acquire the skills they need to snag a well-paying coding job if they want one?

That’s the theory behind the efforts of one DC nonprofit to bring coding classes to low-income kids beginning in 5th grade. The Economic Growth DC Foundation is in its second year of sponsoring its Code4Life program, which runs free weekly classes at one DCPS and two charter schools. The idea is that students will remain in the afterschool program through high school, receiving a series of digital badges that will ultimately render them employable as coders.

On a recent afternoon at KIPP DC Northeast Academy, kids in the program weren’t focused on their future career prospects. But they were engaged and having fun. In one classroom, a half-dozen 5th-graders were using a simple program called SNAP to create intricate moving designs on their laptops. Down the hall, a group of 6th- and 7th-graders were learning how to use Excel spreadsheets to manipulate data.

At the same time, the kids were breaking down operations into steps and making the computations necessary to write their programs, acquiring logical reasoning and math skills that will serve them well regardless of what they ultimately choose to do.

Code4Life currently serves a total of only 75 students and relies on volunteers from Accenture and other places, including area colleges, to put together its curriculum and teach classes. The foundation’s chairman, Dave Oberting, says he’d like to expand the program to more schools, but that would require funding to hire paid staff.

Ideally, Oberting says, he’d like to see coding become a standard part of the curriculum throughout DC. Code4Life, he says, “is a mechanism for showing that [teaching coding] isn’t that difficult.”

In some places, coding class is mandatory for all

Other school systems are managing to do it. Earlier this year, Arkansas passed a law requiring all public and charter high schools to offer computer science classes. Some places are starting before high school—a good idea, considering that most adult coders say they became interested in computers before the age of 16.

The Chicago, New York, and San Francisco school districts have pledged to start teaching computer science to students of all ages. A largely low-income and Hispanic elementary school district near Phoenix is requiring every student to take coding classes. And beginning this year, Great Britain is mandating computer science classes for all students from the age of five.

One problem impeding some of these efforts is the difficulty of hiring qualified teachers, because people with computer skills can generally find better-paying jobs. But teacher salaries are relatively high in DC, so that might not present as much of an obstacle here.

Considering the potential benefits, all schools in the District—and particularly those serving low-income kids—should find a way to teach the basics of computer coding beginning in elementary school. And given the fact that fewer than 10% of poor children graduate with a college degree, DCPS and charter schools need to stop focusing blindly on their “college for all” mantra and start equipping students with the means to make a decent living with a high school diploma.