This week Mayor Muriel Bowser and other DC officials released long-awaited results for grades 3 through 8 from the Common Core-aligned tests given last spring. As expected, scores were far lower than on the old tests, especially for low-income and minority students. But that doesn’t necessarily mean DC schools are on the wrong track. 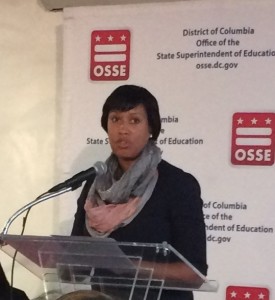 Proficiency rates on DC’s old standardized reading and math tests hovered around 50%. On the new tests—devised by a consortium called PARCC, and taken by students in DC and 11 states—the proficiency rate is only about 25%.

Scores on the PARCC tests fall into five categories, with the highest two (4 and 5) considered to be meeting or exceeding expectations for “college and career readiness.” As you can see from the chart below, far more white students fell into that category than black or Hispanic students. And far more black and Hispanic students than whites fell into the lowest category, “Did not yet meet expectations.”

The gap is even larger between white students and other groups, such as students in special education (SPED) and English Language Learners (ELL). (The “at-risk” category includes students in foster care or receiving government benefits.) 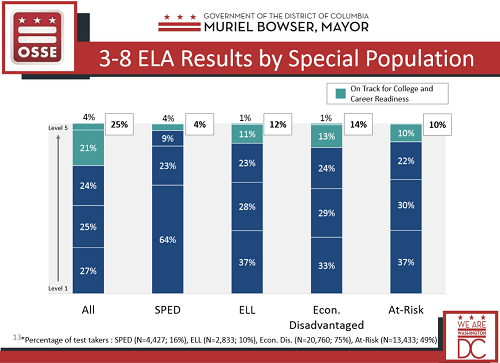 If you want to explore the PARCC data in detail, there are various spreadsheets and other resources available on this DC government website, and a series of nifty interactive graphics are on the District, Measured blog.

Why have the gaps grown? The unsurprising answer is that the tests have gotten harder. And, as various officials explained at the rather sober press conference called to unveil the new scores, that’s something that needed to happen. The old tests were so easy they didn’t mean much. As in other cities, students in DC—especially poor, minority students—were graduating from high school without the skills they needed to enroll in college courses or embark on career training, even if they’d scored proficient on the tests.

And what makes these new tests harder? I’m not that familiar with the Common Core math tests, although I know they require students to demonstrate they understand math concepts rather than just apply math rules. On the reading side, though, the basic reason is that the reading passages on the test assume that students know more vocabulary and are familiar with a wider range of concepts.

Standardized reading tests, by their nature, don’t test any particular body of knowledge. Instead, the tests assess a student’s general ability to understand whatever is put in front of her. That’s partly because different schools are teaching different content. And of course, it’s important for students to develop general reading ability in order to function well in school and in life.

But, as cognitive scientists have shown, the ability to understand a given text depends a lot on whether you’re already familiar with the words and concepts it contains. That may make intuitive sense: just think of what it’s like to try to read a passage on, say, cellular biology if you know nothing about the subject. What’s harder for some of us to grasp is how many words and concepts minority and low-income children aren’t familiar with.

PARCC and the other Common Core testing consortium, SBAC, have released sample questions that provide an idea of the kind of knowledge and vocabulary the tests assume children will have. According to a group called Student Achievement Partners, the 3rd-grade questions use words like fraying, spouting, blossom, nifty, scorched, and nutrients. They also present topics and concepts like Babe Ruth, Indonesia, and the U.S. Congress, along with biological terms like gills, larva, and pupa.

More affluent 3rd-graders may not know all these terms, but—as the PARCC test scores indicate—they’re more likely to have heard enough of them to be able figure out what a passage is basically about. (Cognitive scientists have estimated that a reader needs to be familiar with 90 to 95% of the words in a passage to comfortably understand it.) Studies have shown that children of wealthier, more educated parents hear far more words and engage in more dialogue than their low-income counterparts almost from birth, and they enter school with significantly higher literacy skills.

Some have concluded that, since so much of literacy is dependent on family background, there’s not much schools can do about this situation. And schooling can actually make it worse: some studies indicate that the achievement gap grows the longer kids stay in school. But the fact is, we don’t know what schools might be able to do to close the gap, because most elementary schools serving low-income kids haven’t spent much time trying to systematically build their knowledge and vocabulary.

Instead, they’ve focused on the comprehension skills the tests seem to call for: finding the main idea, making inferences, and—in the Common Core era—connecting claims to evidence in the text. But if kids don’t have the knowledge and vocabulary to understand a reading passage in the first place, they won’t be able to demonstrate any of those skills on the test. And it may take years for a low-income student to acquire enough knowledge to do well on a test of general reading ability.

“People want us to just flip a switch, and young people will be off to Harvard,” DC Public Schools Chancellor Kaya Henderson said at Monday’s press conference. “That’s not the way it works.”

She’s right: these things take time. The real question is whether schools in DC are on the right track. Henderson and others point to data in the test results to argue that the answer is yes: generally higher test scores at the lower grade levels than in high school. That shows, they say, that kids exposed to the Common Core approach from an early age are getting it, and that they’ll continue to do better when they reach high school.

But the tests get harder in high school, and kids may just hit a wall—as they have in the past, even on easier tests. And the disparity in scores only holds true for math. In reading, the percentage of students scoring proficient was essentially the same at all grade levels, including high school.

Still, some DC schools are on the right track. A number of educators in DC, in both the charter and traditional public school sectors, have grasped the importance of building knowledge, especially for students who are disadvantaged. I’ve been in classrooms where kids are lapping up facts, words, and ideas that will serve them well in high school and beyond. Whether and when that knowledge shows up in their test scores should be a secondary consideration.