DC Public Schools Chancellor Kaya Henderson has defended her plan to cut Wilson High School’s budget by over 10% per student next year, citing a DC law that requires DCPS to redirect funds to at-risk students. But most of the cut isn’t required by that law.

DCPS plans to spend $8,300 on each student at Wilson, the lowest amount it has allocated to any school on a per-pupil basis for next year.

Designed to accommodate 1550 students, Wilson will serve almost 1800 next year, according to DCPS projections. That’s an increase of 170 students over this year’s enrollment. Nonetheless, DCPS wants to cut the school’s budget by about $300,000.

The Wilson community has protested that class sizes, already high, could climb to 40, and that the cut will hurt the school’s efforts to support its lower-income students. Ward 3 Councilmember Mary Cheh has argued that the planned cut could “dramatically shake” the confidence parents across the District have begun to feel in the relatively high-performing school. 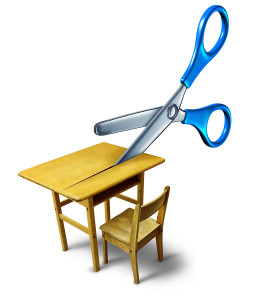 While Wilson is located in Ward 3, its attendance zone extends into other wards. And 43% of its students live outside that zone.

At some other schools, the overall per-pupil spending will be almost twice what DCPS has allocated to Wilson. This interactive graphic, produced by a new coalition of DC education advocates with the help of Code for DC, shows the range of budget allocations for all DCPS schools.

Henderson’s justification for the cut in funds

Henderson has argued that Wilson is losing funds because it has a lower concentration of at-risk students than many other DCPS schools. Two years ago, the DC Council passed legislation providing that DC schools spend an additional $2,000 on each at-risk student, a category that includes those who are homeless, in foster care, on welfare or food stamps, or a year or more behind in high school.

DCPS projects that Wilson will have 582 at-risk students next year, a number that makes up 31% of its student body. That’s a large increase over this year’s figure of 343, and 582 is greater than the total number of students at some other high schools. But at many DCPS schools, 70% or more students are at-risk.

As an example of how the new at-risk allocations will affect Wilson, Henderson cited a DCPS program that awards money for projects proposed by individual schools. Beginning next year, the funding for that program will be tied to the number of at-risk students a school has, a change that Henderson said will result in a loss of $140,000 at Wilson.

DCPS chose to fund other priorities rather than Wilson

But that explains only a fraction of the cut to Wilson’s budget. The remainder does have something to do with at-risk funding, but the connection is indirect.

Last year, DCPS officials said they didn’t have time to allocate the $40 million they got in at-risk funds in direct proportion to the number of at-risk students at each school, as the law required. Instead, they pooled the money and used it to fund priorities they had already set for the current school year, such as improving middle schools. They argued those priorities primarily benefited schools with high at-risk populations.

For next year, the DCPS budget does distribute at-risk funding proportionally. But school officials didn’t want to pull the plug on initiatives they started last year with the at-risk funds they had pooled. So, Henderson explained in a letter to Cheh, they “identified acceptable cuts elsewhere” in order to continue to fund them. They also wanted to focus on schools with at-risk students and the priority DCPS has set for this year, high schools.

In a heated exchange with Cheh at a DC Council hearing yesterday, Henderson elaborated on her view of what the at-risk legislation requires. (The exchange begins at about an hour and 12 minutes into the hearing.)

“Those funds were to be distributed proportionally,” Henderson told Cheh. “It didn’t say what number do you have, it’s what proportion. I don’t know how we distribute proportionally and not have loss at schools that have lower proportions. That’s the law.”

What DCPS chose to cut was Wilson’s “per-pupil funding minimum,” or PPFM. DCPS came up with the PPFM three years ago to make sure schools with larger enrollments weren’t getting shortchanged. The problem stems from the fact that DCPS doesn’t allocate money to individual schools on a per-pupil basis. Instead, it gives each school funds for a certain set of staff positions.

DCPS generally funds those positions at the same amount, regardless of how many students attend the school. At large schools, costs like the principal’s salary are spread over a greater number of students, resulting in lower funding per pupil than at small schools. To offset that effect, DCPS decided to ensure that per-pupil funding at larger schools wouldn’t fall below about $9,000.

But, Henderson said, that policy cost the school system about $9 million this year, including $3 million at Wilson alone. Many of the schools receiving PPFM funds have relatively low concentrations of at-risk students. So DCPS officials decided to cut the PPFM payments for all schools other than Wilson. There, it eliminated the PPFM altogether.

That $3 million PPFM cut explains why Wilson’s funding for next year is so low. As the budget data tool shows, the funds Wilson will get in other categories, including at-risk, have actually increased.

Henderson says the cuts at Wilson will be “mostly” offset by new investments that all high schools will get next year, such as a new athletics and extracurricular coordinator. But Wilson parents say that change will actually result in the elimination of one of two current staff positions, and that the overall effect of the new investments on Wilson’s budget is nil.

Overcrowding at Wilson is the basic problem

The basic problem is that Wilson has too many students, while other neighborhood high schools are underenrolled. In her letter, Henderson also outlined several plans for decreasing Wilson’s population next year.

For example, she pointed to over 100 out-of-bounds students there who have more than ten unexcused absences. DCPS will start enforcing an existing policy that would send such students back to their zoned schools, she said.

But Wilson parent leaders say measures like that won’t make up for the cuts. And education activist Matt Frumin, a former Wilson parent, argues that enforcing the attendance policy could have harsh results. DCPS defines “unexcused absence” to include instances when a student is late, perhaps because she had to accompany a younger sibling to another school.

As a longer-term solution, Henderson pointed to the new school boundary plan that will shrink Wilson’s attendance zone. But because most students are grandfathered in to their current feeder patterns, the effect on Wilson’s population is years away. And Frumin, who was a member of the committee that drew up the new boundaries, says the changes will prevent Wilson’s overcrowding from getting worse but won’t solve the problem.

Frumin and others arguing on Wilson’s behalf are asking that the school get an additional $900,000 next year. Henderson says she’s already cut her administrative budget by $15 million, and there’s no way to find money for Wilson without inflicting harm on other schools.

No one, including advocates for Wilson, wants that to happen. It’s possible that the DC Council will appropriate additional money for the school. But one way or another, DCPS should at least treat Wilson the way it’s treating other large schools that have benefited from the PPFM in the past: by reducing that allotment rather than eliminating it entirely.

Henderson may be right in feeling that schools with higher proportions of at-risk students need additional help. But she’s mistaken in claiming that the law requires her to divert as much funding as she has from Wilson. And that claim doesn’t accord with the clearly discretionary decision-making process she described in her letter to Cheh.

Even as a matter of policy, depriving Wilson of the funds it needs to succeed, and to help its nearly 600 at-risk students succeed, doesn’t make sense.